In January, Lake Travis Life asked me to photograph this artist in her home studio for the article "Lakeway's Janet Sopp-Sims Gets to the Art of the Matter."  It's now the cover story of LT Life's March issue.

A native of Kettering, OH, Janet and her husband, Eric, are now Lakeway residents. Janet attended Columbus College of Art and Design and graduated with a bachelor of arts degree in sculpture and painting and a minor in graphic art.

Artistic talent runs in her family but Janet is soaring to new heights of acclaim.  Janet was recently recognized for her work with membership in the National Association of Women Artists in November and the Artists of Texas in December, 2012.  The National Association of Women Artists, founded in 1889, is the oldest professional women's art organization in the country.

"Ultimately, I would like to have an international reputation," said Sopp-Sims. The day of the shoot, she was working on a piece for the Derwent Pencils contest in the UK. She loves shapes of wine glasses and likes " the deep, rich red color that some wines have, especially the big, bold, spicy ones."

Read the entire article at http://emagazines.hibu.com/laketravis. 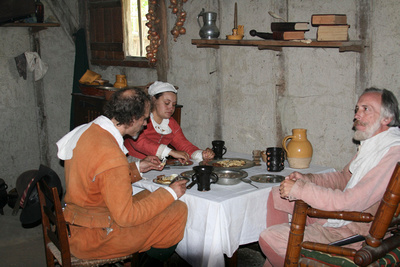 The first Thanksgiving was a three day feast in the fall of 1621 attended by the 56 surviving Pilgrims and 91 of their Indian friends who helped them through that first year in the New World.  See The Thanksgiving Story (Part 1).

On June 20, 1676, the governing council of Charlestown, Massachusetts, held a meeting to determine how best to express thanks for the good fortune that had seen their community securely established.  By unanimous vote they instructed Edward Rawson, the clerk, to proclaim June 29 as a day of thanksgiving.  It is notable that this thanksgiving celebration was meant partly to be in recognition of the colonists' recent victory over the "heathen natives".

October of 1777 marked the first time that all 13 colonies joined in a thanksgiving celebration.  It also commemorated the patriotic victory over the British at Saratoga.  But it was a one-time affair.

George Washington proclaimed a national Day of Thanksgiving in 1789, although some were opposed to it.  There was discord among the colonies, many feeling the hardships of a few pilgrims did not warrant a national holiday.   And, later, President Thomas Jefferson scoffed at the idea of having a day of thanksgiving.

It was Sarah Josepha Hale, a magazine editor, whose efforts eventually led to what we today recognize as Thanksgiving.  Hale wrote many editorials championing her cause in her Boston Ladies' magazine, and later in Godey's Lady's Book.  Finally, after a 40-year campaign of writing editorials and letters to governors and presidents, Hale's obsession became a reality when in 1863, President Lincoln proclaimed the last Thursday in November as a national day of Thanksgiving.

Thanksgiving was proclaimed by every president after Lincoln.  The date was changed a couple of times, most recently by Franklin Roosevelt, who set it up one week to the next-to-last Thursday in order to create a longer Christmas shopping season.  Public uproar against this decision caused the president to move Thanksgiving back to its original date two years later.  And in 1941, Thanksgiving was finally sanctioned by Congress as a legal holiday, as the fourth Thursday in November. 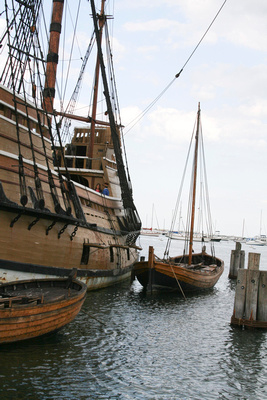 The Pilgrims who sailed to this country aboard the Mayflower were originally members of the English Separatist Church (a Puritan sect).  They had fled their home in England and sailed to Holland (The Netherlands) to escape religious persecution.  There, they enjoyed more religious tolerance, but they eventually became disenchanted with the Dutch way of life, thinking it ungodly.  Seeking a better life, the Separatists negotiated with a London stock company to finance the pilgrimage to America.  Most of those making the trip aboard the Mayflower were non-Separatists, but were hired to protect the company's interests.  Only about one-third of the original colonists were Separatists.

The Pilgrims set ground at Plymouth Rock on December 11, 1620.  That first winter was devastating.  By the beginning of the following fall, they had lost 46 of the original 102 souls who sailed on the Mayflower.  But the harvest of 1621 was a bountiful one.  And the remaining colonists decided to celebrate with a feast - including 91 Indians who had helped the Pilgrims survive their first year.  It is believed that the Pilgrims would not have made it through the year without the help of the natives.  The feast was more of a traditional English harvest festival than a true "thanksgiving" observance.  It lasted three days.

Governor William Bradford sent "four men fowling" after wild ducks and geese.  It is not certain that wild turkey was part of their feast.  However, it is certain that they had venison.  The term "turkey" was used by the Pilgrims to mean any sort of wild fowl.

Another modern staple at almost every Thanksgiving table is pumpkin pie.  But it is unlikely that the first feast included that treat. The supply of flour had been long diminished, so there was no bread or pastries of any kind.  However they did eat boiled pumpkin, and they produced a type of fried bread from their corn crop.  There was also no milk, cider, potatoes, or butter.  There were no domestic cattle for dairy products, and the newly-discovered potato was still considered by many Europeans to be poisonous.  But the feast did include fish, berries, watercress, lobster, dried fruit, clams, venison, and plums.

This "thanksgiving" feast was not repeated the following year.  But in 1623, during a severe drought, the Pilgrims gathered in a prayer service, praying for rain.  When a long, steady rain followed the very next day, Governor Bradford proclaimed another day of Thanksgiving, again inviting their Indian friends.  It wasn't until June of 1676 that another Day of Thanksgiving was proclaimed.

Return tomorrow for the rest of the Thanksgiving Story (Part 2). 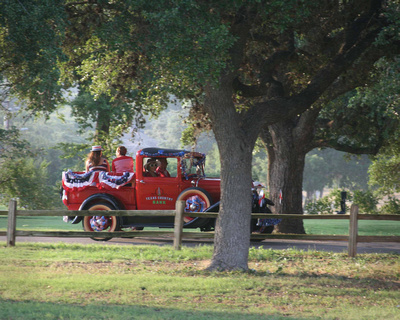 The City of Lakeway Arts Committee held the eleventh annual Photo Festival October 29 through November 3. Seventy-six extraordinary photographs submitted by thirty three local photographers depicted subjects of Lakeway in the categories of Nature, Wildlife, Events and Volunteers. Local citizens cast their ballots for their selections of ‘Best of Category’ and ‘Best of Show.’ Congratulations go to all the participants and winners.

The Lakeway Events category was won by Celebrating the Fourth by Bill Hawkins.

Bob Weichsel, owner of the 1932 Ford Model A pickup, shared its history. The truck found its way to Texas from Georgia where it spent some time with various owners. He noticed it one day just south of LaGrange, TX on Hwy. 71 at Southwest Thunderbird, an antique auto dealership.  Bob said it evokes memories of his first Model A that he purchased in the 1940's in McKinney, TX. 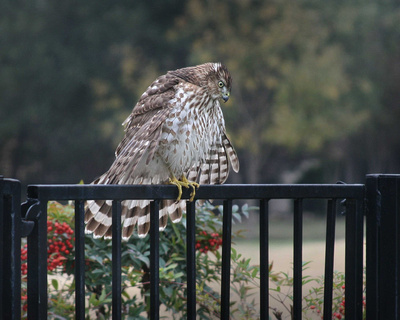 The City of Lakeway Arts Committee held the eleventh annual Photo Festival October 29 through November 3. Seventy-six extraordinary photographs submitted by thirty three local photographers depicted subjects of Lakeway in the categories of Nature, Wildlife, Events and Volunteers. Local citizens cast their ballots for their selections of ‘Best of Category’ and ‘Best of Show.’ Congratulations go to all the participants and winners. The 2012 Lakeway Photo Festival award-winning photos are on display in the Gallery Hall at the Lakeway City Hall through the month of November.

The People’s Choice award for “Best of Show” photograph went to Hawk by Bill Hawkins. He captured a rare scene of a hawk on a fence in his backyard.  Hawkins’ photo of Hawk also won first place in the Lakeway Wildlife category. Lakeway Events category was won by Celebrating the Fourth by Bill Hawkins.